Anjou has plenty of lovely roads to ride a bike along. By following the path of rivers to meet the Angevine heritage and vineyards, bike aficionados discover Anjou in its full size. Many routes with variable length and great diversity are waiting for you. You may find more detailed information on the website of Anjou Tourism and on site at the Tourist Office of Durtal.

If it is your wish, we at the Orangerie de la Touchardière may prepare a picnic for you to carry and enjoy during your trip.

Boat ride on the river Sarthe

Aboard the “La Gogane” riding boat, you will be scouring the river Sarthe between Briollay and Morannes in the Maine-et-Loire département, and you will fall under the spell of its splendid landscapes and preserved wildlife. You will intensely experience the crossing of locks as bargemen used to.

This traditional boat is equipped with an electric engine, which makes navigation a unique experience in harmony with nature, without any noise disturbance. The boat can carry up to 50 passengers. Reservations are to be made at the Tourist Office of Durtal.

The Châteaux of the Loire Valley

A one-hour drive from the Orangerie de la Touchardière, is the Château of Villandry. Located near Tours, this magnificent Renaissance-style château, the last to be built 10 years after those of Blois and Chenonceaux, is an absolutely gorgeous historical monument. It is a very large château to discover and its four splendid French-styled terraced gardens will impress you with their sharp lines and their harmonious geometric patterns.

After walking around all the rooms in the château and gazing at its lavish decoration, which reflects the various periods it has been a witness to, you will be able to relax in the splendid English garden and behold the château’s reflection on the peaceful river.

An hour and a half from the charming residence of the Orangerie de la Touchardière, from which you can set out to discover the Châteaux of the Loire Valley, the Château of Chenonceau’s history is intimately linked to that of the Great Ladies of France, hence its nickname Château des Dames.

This majestic monument stretches across the river Cher with all the gracefulness of the Renaissance and early Classicism periods. Inside the Château, a magnificent collection of paintings, tapestries and sculptures will undoubtedly enthrall art lovers. Then you will be able to take a walk in exceptional gardens and thus stroll across the garden of Diane de Poitier, or that of Catherine de’ Medici. 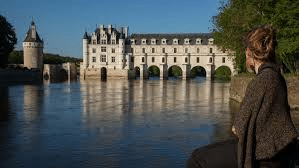 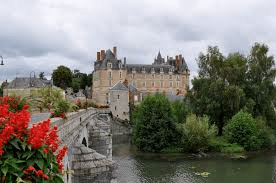 A 4-km (2 1/2 mile) walking trip to discover the charming town of Durtal and its château makes part of the unescapable activities within a 10-minute range around the Orangerie de la Touchardière. The town has elaborated a discovery path to let you learn about its heritage. 11 entertaining steps along a 4-km loop for the joy of children and adults alike.

You can find all the information you need at the Tourist Office of Durtal.

The Pointe de Bouchemaine and the Angevine cliff road 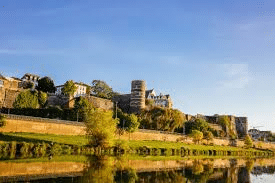 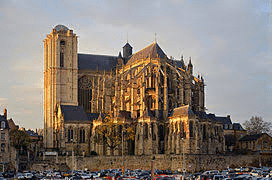 A city of art and history, Le Mans has an astonishing diversity of architectural styles, ranging from Prehistoric times to the contemporary period, as well as impressive, unrivaled works.

This medieval city developed around the first cathedral and the old town from the 6th century became Le Mans in the 12th century. The Cité Plantagenêt in the old district invites you for a walk back through time to discover the city’s history.

From the remarkable Roman surrounding walls to the most beautiful Saint-Julien Cathedral, which was built in the 6th century on top of the Roman forum, the city will give you everything to enjoy, whether you love art, take a leisurely stroll, or are a gourmet looking forward to taste the region’s numerous wines and culinary specialities.

In July and August, do not miss out the illuminations of the Nuit des Chimères, where all the major figures of Le Mans are revived in sound and light shows that highlight seven monuments in the Old City.

5 km south-east of Le Mans, the splendid Royal Abbey of L’Épeau constitutes one of the very best examples of Cistercian architecture in France. In 1229, Richard Lionheart’s widow Bérengère of Navarre set out to found the abbey where she would be buried a year later. When the Revolution struck, the abbey had been almost deserted by the monks since the 18th century and was confiscated as a national property and then sold to an industrialist.

On the way back to your charming residence of the Orangerie de la Touchardière, 40 minutes from Le Mans, do not forget to visit the Museum of the 24 Hours of Le Mans, as well as to take the guided tour of the Bugatti track. South of Le Mans, between the D338 and D139 roads, the main entrance to the 24H track gives you access to the Bugatti track and to the museum by way of an underground road.