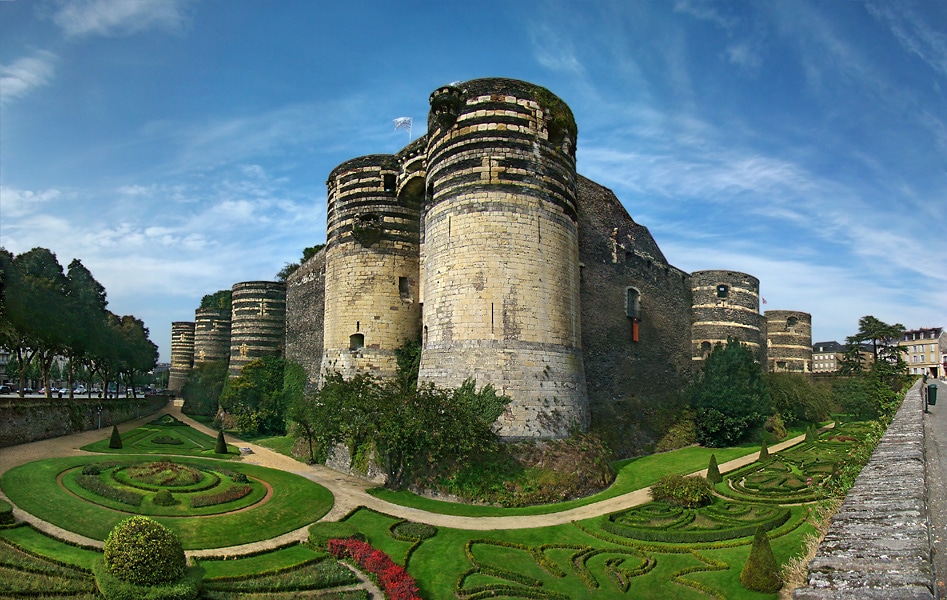 Angers’ castle, also named the Castle of the Dukes of Anjou, is located 30 minutes by car from the Orangerie de la Touchardière.

Angers is a dynamic city with a rich architectural heritage. It is also a green city with many parks where you can take a stroll, bars and restaurants that liven up, and a very enjoyable city centre.

It will be a pleasure for us to pass on to you our good addresses so that you can make the most of our experience.

With its massiveness and its time-resisting strength, this feudal fortress overlooks the Maine river and impresses the visitors with its majesty.

Erected in 1231 by St. Louis’ mother Blanche of Castile, it represents a magnificent specimen of feudal architecture.

Built on sandstone and granite foundations, it owes its stripy appearance to the alternation of dark slate schist blocks with white stone layers.

Due to perpetual conflict between Catholics and Protestant Huguenots, it was threatened with demolition in 1585 on the request of Angers’ burghers but was hopefully rescued by governor Donadieu de Puycharic.

In the royal chapel, which dates back to the 15th century, you may behold one of the most splendid sculpted keystone vaults in Anjou, as for the royal abode building, it is a good example of seignorial dwelling in Louis II’s time.

The 96-meter main gallery, is carved half-way into the ground and hosts the Tapestry of the Apocalypse.

The Castle of Angers’ Tapestry of the Apocalypse

This work with monumental dimensions (140 m / 450 ft in length, 6 m / 20 ft in height) is the largest tapestry ensemble known to this day. It was designed to be carried from castle to castle. There is no other such historical treasure in the world. The wall covering was ordered by Louis I of Anjou and woven from 1373 to 1380 by Parisian weaver Nicolas Bataille, on the basis of Hennequin of Bruges‘ drawing boards.

This work of art looks admirably fresh, like a sumptuous comic strip that takes us scene after scene into the symbolic and prophetic visions of Saint John the Evangelist’s book, which is the last in the New Testament and was allegedly written in the first century A.D..

The 76 scenes that are visible today are 104 m (340 ft) in length and were renovated between 1843 and 1870 thanks to Canon Joubert, who set himself to gather the elements and recreate their series. 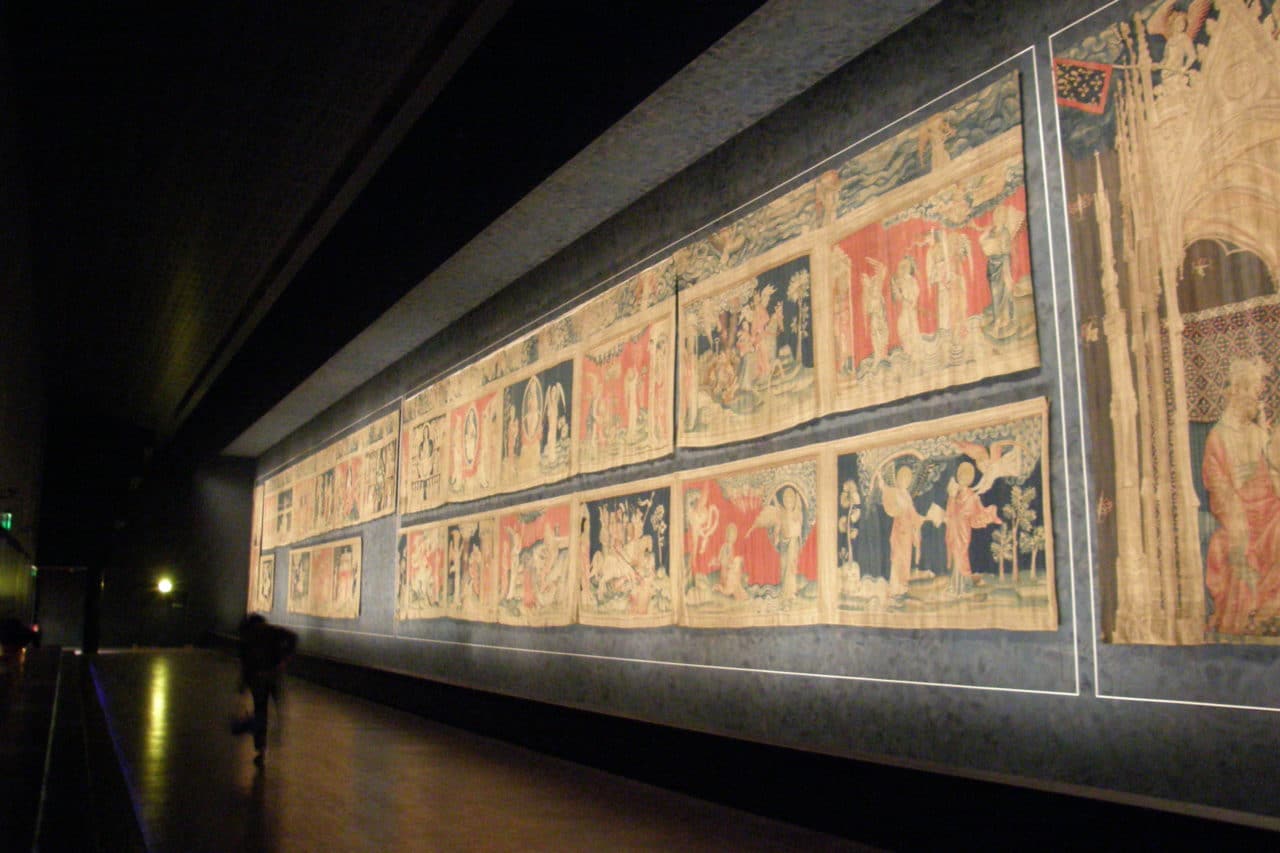 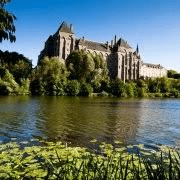 The Abbey of Solesmes and its Gregorian chant

Located 3 km (2 miles) from Sablé-sur-Sarthe and 20 minutes from the Orangerie de la Touchardière, the Abbey of Solesmes has been for centuries a major place of spirituality and Gregorian chant.

The Saint Peter Abbey of Solesmes is a living place thanks to the sixty-some monks who live there today and make it an unescapable site to visit in our beautiful region.

Everyday at 10 a.m., the monks give thanks to God with their immense talent and offer you to attend a conventual sung mass.

You can also visit the abbey, a monument of great beauty, and discover among its treasures the 200,000-book-strong library.

When you are done with this touching visit, you can have lunch at the Grand Hôtel of Solesmes, where you will be served great quality cuisine, which is elaborated as seasons go.

Here, the protective moats have become a pond, a backdrop of greenish water on which sits an adorable, elegant and robust castle. The monument has served as a setting for many films, from “Donkey Skin” to “Le Bossu”, by way of “Fanfan la Tulipe”.

Who would think that the grooves that come down the rampart walk that runs along the Southern side represented formidable catapults? Who would think the narrow terrace that girds the castle allowed for low-height shooting?

All white, crowned with blue-toned slates, the magnificent castle of Plessis-Bourré was built from 1468 to 1473 and tells us about manorial life like the depiction of a tale. It is a faithful representation of what France was in the 15th century, a mix of a stronghold and an ornamental residence. Quite enough to make it an unescapable step in your stay in Anjou.

Inside, a large number of the displayed furniture pieces are historical originals and amongst the preserved treasures, we may mention a splendid, bulky fireplace in the parliament room, whereas the guards’ room’s coffer ceiling is adorned with a extraordinary series of 24 paintings.

A room in this lovely building shows portraits of Jean Bourré, whom the king appointed as high financier in 1461, and of his family who founded the castle.

It is therefore 30 minutes from the Orangerie de la Touchardière that you will be able to bring a unique touch to your discovery trip in Anjou. Indeed, if you plan things early on, you will have the opportunity to enjoy a personal visit with the director of the Castle of Plessis-Bourré. Because he is a historical monument manager first and not a guide, he will give you another viewpoint on the castle and its history. 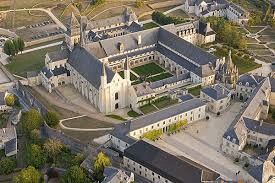 The Royal Abbey of Fontevraud

Less than an hour from the Orangerie de la Touchardière, you will be able to enter the largest ensemble of monasteries in Western Europe.

The abbey was founded in the 11th century by Robert d’Arbrissel, a man with an ascetic lifestyle who wrestled all his life against the decline of the Church. It consisted in the peculiar organisation of a mix-gendered community of men and women united under the authority of an abbess.

The last abode of the Plantagenets of Anjou, who then became kings of England, this family placed Fontevraud under their protection.

Turned into a jail under Napoleon, it was finally reinstated in 1963.

The extraordinary romanesque kitchens, decorated after the Byzantine style, include no less than 22 secondary fireplaces and one main fireplace of 28m (90 ft). Nevertheless, the purpose of those kitchens is debatable, since monachal meals remained frugal, even for 700 people. One hypothesis is the kitchens actually served to salt and smoke salmons, which repleted the Loire river. In the priory of Saint-Lazare-de-l’Abbaye, you will be able to supplement your visit by being served a gourmet lunch or dinner at the Michelin-starred Fontevraud restaurant.

The complete tour of the Abbey takes 2 hours and a half and on the way back to the Orangerie de la Touchardière, you may stop by the lovely town of Baugé and behold its château, its “Hôtel-Dieu” almshouse-hospital, and it apothecary’s shop.

Back at the Orangerie, you will be able to chill in the pool, take a stroll in the park, or just sip a drink on the terrace or in the minor living room.

The Château of Brissac

The Château of Brissac is among the most remarkable in Anjou and was built upon the remains of a stronghold initiated by Count of Anjou Foulques Nerra. It was under the reign of Francis I that the Brissac family took hold of the place and that reconstruction ensued between 1614 and 1621 under the supervision of Charles de Cossé, Marshall of France. It still belongs to his descendants.

The Château of Brissac owes its distinction to its dizzying height and its more than 200 rooms distributed across 7 floors, which makes it France’s tallest castle.

One of the most gorgeous rooms is the Belle Epoque theatre, now a very much popular concert venue for music lovers. The immense verdant park by the Aubance river will give you the opportunity for a boat trip and the stunning collection of wines should impress educated amateurs.

It will take you less than 45 minutes from the Orangerie de la Touchardière to reach this unescapable excursion site. 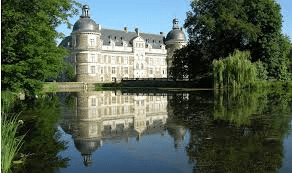 Dating back to the Middle Ages, the first building belonged to the Serrant family. In the 16th century, Charles Pean de Brie undertook to build the Renaissance-style Château and tasked Angevin architect Jean de l’Espine, who also built the central steeple of Angers cathedral.

Located 45 minutes from the Orangerie de la Touchardière, the Château de Serrant is erected amidst a beautiful park, on a reclamation ground surrounded with moats and forming the main courtyard. Major artists like Lebrun and Mansart worked to decorate it. Inside the Chapel, the Marquis de Vaubrun’s mausoleum is an absolute masterpiece.

The library contains more than 12,000 works, including real treasures such as the first prints of La Fontaine’s Fables and their illustrations by Oudry, and of Diderot’s Encyclopaedia.

After you leave this sumptuous residence that marvellously mixes austere schistic rock and light-toned tuffeau, you may go and visit the village of Savennières, especially the small walled vineyard that produces the prestigious Coulée de Serrant wine.